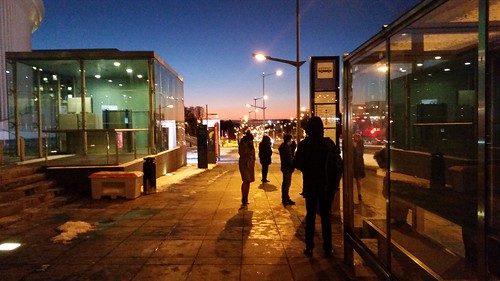 I have been in Luxembourg just shy of two months now, and if you were to ask me what was the thing which caught my attention, I would have to say it was the number of people who smoke. It is quite remarkable.

The photo above was taken some evening I was getting a bus to the shopping centre, rather than doing what any sane person would, which is go home and curl up next to the radiator. It has been cold here in Luxembourg – we had an orange weather alert warning us that temperatures were due to slip down to -10 last night. We have not had much snow since the beginning of January though and what remnants that are left lying around have just never quite got around to melting. You see them in the parks and on the the banks on the approach to the city from Remich. I was in Remich the other day.

On Friday afternoon, I got the bus to art heaven superstore, Boesner. It is just over the border from Luxembourg but not exactly straightforward to reach by public transport. It is, however, one of the best art stores I have been in. It is almost close to Schleiper. I bought a load of stuff I didn’t need but really really wanted which is typical really. It’s like going to IKEA.

From there, I got the bus to Nennig which is the border town on the German side of the Moselle river. It was pretty much flattened during the war, apparently. Nennig is on one side of the river and literally on the otherside, is Remich. I walked across the border several times, and thought malevolent thoughts about Brexit and the saps who want to destroy the European Union. I got my bus back to Luxembourg city from the customs checkpoint that looked like well it was hardly opened from one end of the year to the other. Along the Moselle, under the bridge, was the biggest conflab of swans I have ever seen. It was a stunning afternoon, with a beautiful warm looking sunset. And it was warm. It was 2 whole degrees above city. In the context of a week where the temperatures never got above 0 and where my trip to work was in -7 degrees, 2 degrees was tropical.

Yesterday then was more retail therapy. I needed new trainers, unusually, two new pairs, one for mucking around in, and one for actually running in. I also wanted some basic swimming gear. Having failed to find anything remotely resembling a decent sports shop (I don’t count Footlocker as such) and being vaguely aware that there was a Decathlon or some such out in one of the retail parks (the one that otherwise has a million car dealerships) I wanted to go out. It transpired that it was an Intersport and more to the point, there didn’t seem to be any swimming gear on its website. Knowing Intersport from elsewhere, I found this hard to believe so I wandered out on a bus and had a bit of a look around.

We don’t have ANY sports shops in Ireland like this. This had pretty much everything, and at the moment, it had loads and loads and loads of ski gear with 30% off. I went and found the watersports section and was overwhelmed by the range of swim wear available. My swimming gear is still in Ireland so I have capitulated and decided to start over again. There was a spectacular array of goggles to be chosen from. Somewhat less overwhelming on the noseclip front (Ireland is definitely better on that front for some reason) (do we prefer to make our style statements with nose clips than with swimwear). It’s just occurred to me that I somehow got distracted from buying a pull buoy. That will be changing.

As it happens, I work about a 10 minute walk from the Coque sports centre which has 2 fifty metre polls and a 25 metre pool. Next weekend it has a major swimming meet where apparently I will be able to see Ian Thorpe swim. I don’t really have any excuse facilities wise; it’s just getting my act together to get organised to start swimming again.

In addition to the swimming gear, and the ski gear, and the mountain climbing gear, and the hiking gear, and the many types of shoes and the football section and racket sports section, it had a ballet section which sells Repetto dance shoes (although I did not see any pointe shoes there, sadly). This place was a palace of supplies to enable you to be active. I got a beautiful pair of Asics trail running shoes, despite currently not doing any running plus a pair of Nike tennis shoes to knock about it. Oh and it sold many sleds.

I’ve been in a few sports superstores in my life and always been stunned by how much better they were than Irish sports stores, but this took my breath way. Witness the wall of shoes where shoes were labelled according to what sport you used them for or whether they were fashion accessories. I was mesmerised.

In the meantime, I need to check out the pools sometime soon and get a membership card so I can perhaps go before work if I am up early enough.

In other news, having suffered so far 2 weeks on only having a kitchen and a bed in terms of furniture, the rest of my furniture is due to turn up next week. I am looking forward to that. This week also I plan to join a painting club. I need to check out the knitting club as well. I like Luxembourg so far.