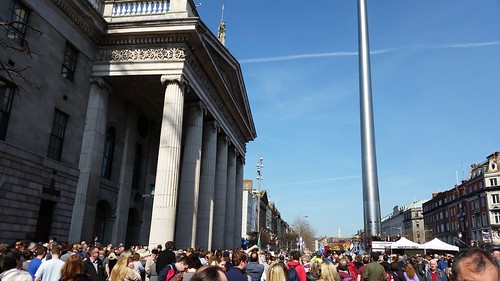 RTE ran a kind of re-enactment historical event in Dublin City Centre today to have a look at what life in Dublin might have been like around 1916 and in the run up to the 1916 Rising. I went into it really to see the tram (I love that tram) and maybe take a few photographs for sketches I might do later. I haven’t decided yet.

The weather was stunning. The sky was a glittering blue, a lot of people came out and there was a terrific atmosphere around the city. Many people were clad in period appropriate garb which looked fantastic, but which must have been stultifyingly warm. There was an Edwardian music stage, a wedding, a funeral, the occasional march of would be rebels. In a way, it was very like those sliding photographs you get today where you can slide from 60 years ago to how a place looks now. You could not get into any of the talks for love nor money. I think, arguably, RTE could call it a major success. I’ pleased for them, and I’m pleased that there was a focus on social history like what were people wearing, what were the talking about, how were things like funerals and weddings organised by people at the time (the wealthier ones anyway). That it wasn’t just a militaristic event.

One of the things which struck me yesterday and which was reinforced by today’s experience is that perhaps, we could pedestrianise O’Connell Street permanently from Abbey Street upwards. It’s a fine wide street and we could, to some extent, turn it into a plaza.

Yes, I know we’d have to re-engineer some of the bus routes but – why not. We are re-engineering the city centre at the moment anyway for Luas re-configuration, and there will be more re-engineering if BRT actually happens (I might not necessarily be in favour of that directly).

Dublin has a dearth of open spaces like squares with cafés. Where we have squares, they tend to be garden squares, like Merrion Square. I’ve long wondered if we could pedestrianise a reasonable swathe of the city centre – there are old pictures of the area in front of Busaras where the Amnesty International Gas Candle currently stands, behind Custom House and the IFSC. But these open spaces, like College Green just have cars and buses going through them.

O’Connell Street looks like it could work though. We could pave it properly as a square and be a bit more careful about who we let open businesses in there and turn it into an amenity for the city. We don’t have to make it the main thoroughfare any more. There are a load of bridges built and if we re-engineered public transport effectively, we wouldn’t even be dealing with as much car transport.

And if we got it to work there, how about making it work in College Green, for example. I’m open to suggestions.

We rely too much, sometimes, on the Phoenix Park for the lung of the city. I just think we could reconfigure the city so that it becomes much more attractive to walkers than to avoiders.