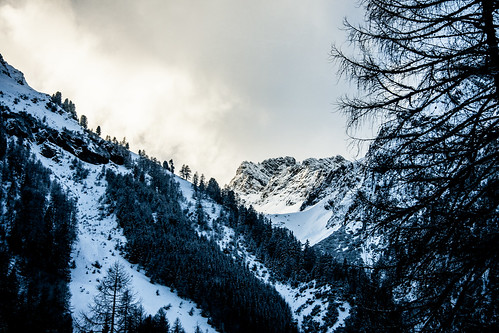 A while ago, I realised that my life was going by and it was about time I started doing things rather than thinking about doing them. As a result, I spent the last week in Switzerland, primarily doing the Glacier Express train trip.

There were mountains. High mountains with big lots of trees and snow on them. It was wonderful.

There was also the Caran d’Ache shops in Geneva and Zurich. I have loved and adored Caran d’Ache writing instruments since I was 15 years old. The only place that really sells them in Dublin is the Pen Corner, and while they have accommodated me with special orders once in a while, they don’t do the art side of things. Kennedy have some of the pencils, but nowhere near to all of the pencils.

As a result, the Caran d’Ache shop in Geneva was the ultimate shop in the world for someone like me. Lots of limited edition fine writing implements, the sort with near annual income salary level pricing (there must be a lot of very, very wealthy people in Geneva). I bought two Paul Smith 849s which I wanted and which have the benefit of not being expensive, but not being cheap plastic either.

I like the 849 pens – I have about half a dozen at this stage and they are a nice weight in my hand. They are, perhaps, not as nice as the Ecridors themselves (130E if you’re buying – I was not on this occasion although I have a shopping list of 3 that I want – it never ends). And of course, there were the pencils.

Plus there were a few Swiss Wood pencils, and series five of the woods of the world collections. I could have spent a lot of money in the Caran d’Ache shop just on art pencils. The truth is I was somewhat limited by the whole lugging thing – my holiday consisted of five days of travelling basically – so I was able to resist full boxes of their neocolor IIs and other water solubles.

I did buy a couple of brushes because they were the equivalent of 2 euro less expensive than they are here and brushes are always handy. In theory, I’m not really needing to buy pencils as I binge bought a bunch of Faber Castell Sparkles not so long ago (they tended to be very hard to get here for a while although since I stocked up, both Easons and the Art and Hobby Store have got in copious supplies).

But I found it very hard to say no to the Caran d’Ache Swiss wood basic HBs. Basic isn’t a great word – they are probably twice the price of the sparkles and you can’t get them here. I have five of them which should keep me going for a while. They have a most beautiful smell of wood.

Outside the shopping in Caran d’Ache’s shops, I spent time in Zermatt, Saint Moritz, Lugano, and especially, I spent time in Swiss trains. The Glacier Express is a 9 hour train journey which basically goes from Zermatt to Saint Moritz or vice versa. I was hoping to see the Matterhorn: 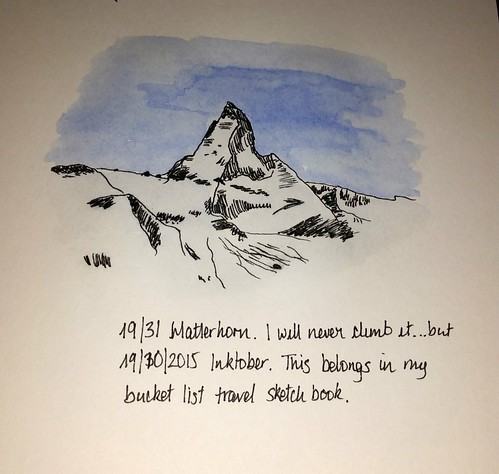 But it was covered in clouds/fog/hidingtypeweather for the day I was in Zermatt. This was regrettable.

The journey across Switzerland was amazing – we don’t do scenery like it and we certainly don’t do weather like it. The Glacier Express is certainly worth doing in the winter, and they will lay on lunch for you for a consideration – it’s around thirty francs and it is definitely worth doing it.

Saint Moritz was where I bought some non-Caran d’Ache writing tools, and had a walk around. It’s a lovely town, for what I saw of it, although it could be a very expensive place to be shopping given that the shops tend to the high income level brands rather than your average high street store.

From there, I took the scenic train back down to Chur, which I was hoping would be brighter than it had been the evening before but the fog never lifted. It was very atmospheric, but not very conducive to photographs.

I then took the long way to Lugano, via Zurich, which is a lovely train journey even in one of the high speed Intercity Express trains which run all the way to Hamburg.

Zurich is a lovely town. It took has a Caran d’Ache shop. The buildings are beautiful and the train station is especially beautiful as train stations go. It’s also really well located for shopping.

Lugano is beautifully situated on hills around a lake. Again, I wasn’t there for long as I was going onto Como and Lake Como which is a gorgeous, gorgeous town in Northern Italy. From there, I finished up in Milan.

In short, I did a lot of travelling on trains in the week and saw an awful lot of Switzerland plus a bit of Italy.

One thought on “Bucket lists and dreams”