Someone posted a link to my FaceBook newsfeed today of an Irish Times amateur travel writing competition. I didn’t read the instructions too carefully, but figured “I can do that”, and went off and wrote a six hundred word piece – this is not a lot of space by the way – about a trip which I felt was likely to be appropriate to enter, and then I read the conditions in more detail. There was a fairly significant rights grab and while I might consider it if I won, I felt it was unfair to take ownership of all entries, even those which the Irish Times might not see fit to publish. The only problem is I’d already written the piece and while I thought about entering it, you know for the power and the glory, there were some comments about any photographs submitted as well. This didn’t really make me very happy. I mean, technically speaking, the text around the rights meant that even if I didn’t win, I couldn’t actually publish the piece anywhere else myself.

So I decided not to enter, bearing in mind I have several blogs of which this handy one is not listed by Google, or wasn’t the last time I checked. Plus, I did actually have some photographs which I had scanned some years ago as they were shot on film. Here then is a 600 word piece about travelling in Provence, written for the Irish Times, but not submitted but since the 600 word limit no longer applies I’m also editing it a bit. 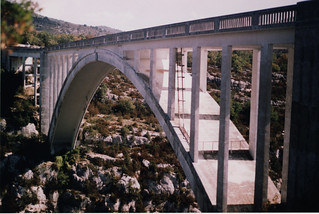 The girl at the car hire place at Nice Airport was a bit lost when I said I didn’t want the upgrade. She wasn’t used to this. Usually people were dying for the free upgrade, for the getting something for nothing lark. She categorically could not give me a small little Peugeot and now I found myself with an allegedly small Mercedes, on a hill, attempting hill start number four, because the wretched thing had cut out on me in a rather inopportune place. Several times.

The road ahead was at least a 45 degree angle and climbing, the road behind me disappeared downwards around a corner in a usefully invisible manner, and I, I now knew what a cold sweat really felt like. Behind me, only trees sloping a long way down. The car had already made several attempts to roll backwards in that direction too. I was a less than relaxed little camper. The hill start in my driving test was nothing like so stressful on a slip road outside Mallow. I had visions of winding up in the wreckage of a silver Mercedes A-Class tumbling down the side of a friendly Alp. As a way to go, it wasn’t what I would have wanted, per se.

Angles is a tiny village in the south of France. It very much is a handy place to base yourself if you want to visit the Gorges du Verdon, a site which is very often described as Europe’s Grand Canyon, somewhat unfairly I feel. They may both be fairly noticeable gashes in the rock we live on, but they are truly different from one another in terms of colour and feeling.

One of the things which has haunted me for years is the glittering turquoise water of the lakes in the region. I saw a picture once as a child and it took me fifteen years to find out that it was the Lac de Sainte Croix, easily accessible by car from Nice Airport.

For all that ease of accessibility, Angles, however, is truly isolated. I imagine it would be a hard place to live in the winter sometimes.

I am staying with very nice people who loan me a map and show me the small, narrow roads with the spectacular views to drive around the Gorges du Verdon. The small, narrow roads, incidentally, which are not on the map of the south of France which I may have bought in a leading Irish bookseller in the days before Google Maps and Garmins gave us directions.

The roads around the gorges themselves can be challenging and damaged but the department of Alpes de Haute Provence has provided viewing platforms all over the place. Stopping to look is never anything other than awe-inspiring, even if the roads to get to them can be a bit terror-inspiring.

On the day I drove them, some brave and foolhardy soul took a Ferrari up there. And people climb up the cliffs, casting occasional looks over their shoulders to the view. I would love to be the kind of person who could do it, but deep down, I know I might never have the nerve. 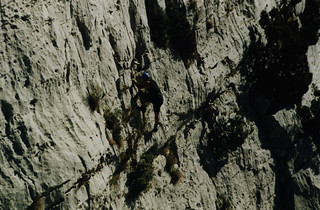 The River Verdon is a long way down, a mere flicker of turquoise in the distance.

The high point – in more ways than one – of the trip is the Pointe Sublime, a stunning area where the cliffs on either side of the river seem to reach across and try to kiss. It is an extraordinary view, and the rocks are an unusual creamy colour for a tourist from Ireland where the mountains are generally grey, regardless of the rain or not. 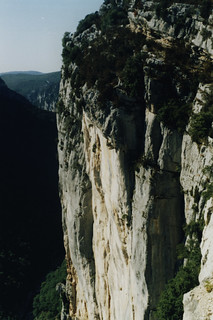 To come home I have to navigate the narrow road back in Angles. It never occurs to me that a car can cut out so often, especially when you absolutely, totally and utterly need it not to cut out but reader, I made it on attempt number 5.

One thought on “Gorges du Verdon”