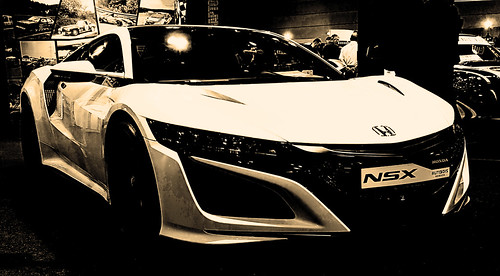 It’s been a while since I carried a real camera and now, if I want to take Photographs, I have to do so within the limits of my phone camera. I never cease to be amazed at how much they have to offer and with a little judicious Photoshop.

I kind of like taking photographs of cars, and I don’t get the opportunity to photograph supercars very often. If you’d asked me before today what supercar I’d buy if I ever had the choice, I’d have said, with a lot of regret, a McLaren F1. The car is more than 20 years old and there aren’t a whole lot of them around so that’s never going to be anything other than a pipe dreak.

But this Honda NSX is rather attractive. I wouldn’t buy it in white – it’s not really my colour. I think a car like this deserves a brooding grey metallic paint job.

I was marginally disappointed with the shortage of supercars on show. There were a couple of Lamborghinis, and some Ferraris but nothing which really excited me beyond this one Honda.