I went painting today. I need to get hold of the idea of putting these things up on flickr rather than instagram but I will get there. I pay for Flickr, after all. 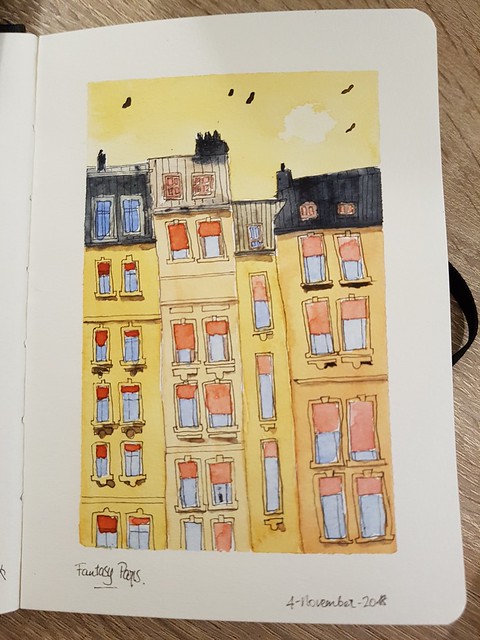 This was from today. It was inspired by a bunch of things in different colours which I saw on pinterest and so I decided to have a go, and there we are. I like it. This was in an A6 sketchbook which I use on and off as a sort of art journal but which has been neglected lately. But I like the idea and the result is, I will probably try and find time (difficult lately) to scale it up and do it in a wall framable size

There seems to be something about Sunday that causes some randomer on FaceBook to decide that today is the day they will troll a watercolour group on FaceBook. Today, we got lectures on how if you used masking fluid, you weren’t a master (well…) and it was cheating (well…) and it wasn’t really art (well…). It caused a lot of discussion, which could be summed up as “You’re a troll” and “You are so wrong, you are wronger than a wrong thing”.

People get irate quite easily on FaceBook. But I cannot blame them when someone wanders in, to put it mildly, to cause trouble in a special interest community. No one really cares for the most part whether you use masking fluid or not (well no one sensible anyway), and yet one person going on about how it isn’t art, and how you haven’t mastered watercolour (while not showing their work) can cause major hassle. I wonder how communities can guard against this, and whether it is really desirable. The question of masking fluid in watercolour is fairly meh, but really, a group of people who think that women should, for example, not be allowed have jobs, might benefit from being challenged a bit.

But that causes ructions too.

Anyway. to the above, the under drawing was down with a PIlot 0.3mm mechanical pencil, the line work was done using a unipin 0.03mm fineliner and the paint was mostly Quinacradone gold from my 12 pan (allegedly – it had twelve when I bought it but I think it now has 15 pans squashed in) Sennelier kit. The exceptions were a little quin red, French Ultramarine Deep for the windows, Paynes Grey and sepia or neutral for the rooves and probably alizeron crimison for the blinds. I used Molotow masking fluid to cover the windows while I painted the buildings. I like their pens and I don’t think I have enough spare so I’ll probably bulk buy them the next time I am in an art supplies shop that sells them.

The 0.03mm fineliner is new. Up until very recently, Unipin’s finest fineliner was 0.05. Copic had 0.03 which were finer, and I liked them for fur but my god they were fragile. You can buy replacement tips. which is handy enough.

The Unipins feel a bit more robust and today’s one at least was really well behaved for the paint. The colour feels a bit darker as well. I haven’t really had time to do a side by side test – I have very little free time and have not had much time to paint at all; the daily kraftbook diary sketch has had to go into catch up mode a lot lately (and I’m about to start a new one there again. I have two months’ supply or so). But at some point I will sit down and do a comparison of the 0.03s –

and I might do a side by side comparison of those with whatever 0.05s which I have (definitely Unipin and Molotow) and the XS Faber Castell