It’s a reflection of how the last few months have been that today, I finally got around to swatching out a paintbox which I bought in London on 8 September. The paintbox is an 18 pan quarterpan box from CassArt. They don’t say what paint is in there which is a pity; it would be nice to know whose paint they do use. I’d guess Daler Rowney though as their set looks almost identical.

Anyway, I don’t know why I wanted it only Shiny, I guess. I like the idea of the little quarterpan box; it’s an enamel box and I have carefully been avoiding buying it. I also own a lot of other paint boxes and mostly use my 12 pain (with three extra added) Sennelier box lately. The fact that it was there, and was instant gratification, was probably a factor.

I haven’t done any sketches with the little Cassart box though. I did manage to make a mess of it, ironically, while cleaning it after doing the swatching but past experience has taught me that’s no big deal. 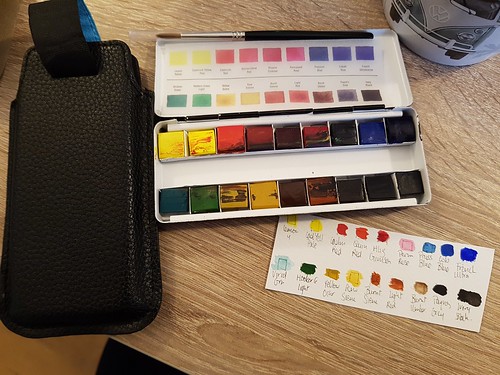 You an see the swatch that comes with the box, plus the little swatch I did as well. There are a bunch of the colours which look a little different for me – the permanent rose and the viridian green for example – but I can see use I would get out fhtme. The Prussian blue is a bit deeper than I am used to with my Senneliers. The selection of colours is not bad at all.

The palette comes in a little case (to the left of the picture above) and a small sable brush which is a bit bigger than the travel brushes which Winsor & Newton include with the sketchbox.

I’m not totally sure what I am going to do with these though. It’s only ever going to be used for small stuff because the pans are so small; so more likely than not, things into the A6 sketchbooks, or postcards, or even the artist trading cards. But it’s probably too small for most of my brushes – I already struggle with the half pans in some cases. 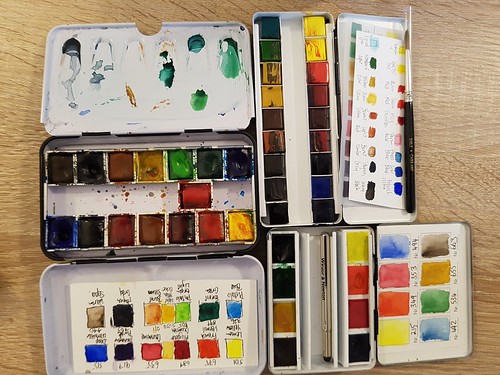 The Sennelier is in my toolbox but my toolbox is causing me trouble as it has missed the original plan for being a toolbox – ie, being portable. The Schmincke is in a small travel kit with a couple of liners and pencils.

Quarter pans are not available so the question will be what I do with the 18 pan set if and when I get to use it – and the speed with which I am going through pans in the 12 pan set suggests this will not be long – the obvious answer is tubes. I own the Schmincke granulating tube set and I use tubes when I am painting with gouache. But I cannot see myself making a wholesale switch to tubes – I simply have too many paints in half pan format that I want, for environmental reasons, to start using.