This is not necessarily a bad thing. My garden, such as it is, could do with it. 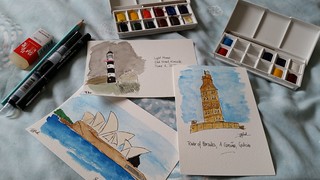 And I have been painting. Some lucky family members are going to get postcards in the future – dependent on when I have stamps sorted out.

Way back in the early days of my search for suitable paper, I picked up a set of watercolour postcards. I’ve played and failed with them over time. I wasn’t very good at painting, by which I mean, noticeably worse than I am now. But there were half a dozen postcards left and the only thing anyone gets in the post lately seems to be bills. Postcards were once a thing. Now it’s email and pinterest pins, and FaceBook posts.

What you see above is pretty much my painting painting kit (I have pencils as well, let’s not go there). The paintbox on the left, my mother bought for me. The one on the right I bought yesterday as a spill over. It came with 12 half pans of colour to, out of which I took 7 which I don’t use much, put in five commonly used colours as spares, and added a couple of new colours which I didn’t have a lot of success in mixing. The half pans are a mix of Cotman student half pans and two or three Winsor & Newton Artist Grade colour. I can’t get the Cotman half pans loose in Dublin (so far) and while I’m well aware that the W&N are technically “better”, I really can’t send too much money in their direction right now. But the blank spaces are for other colours I may feel the need to get in the future.

I like the little boxes because they are small and tidy – compared to my camera equipment, for example. I have looked at some of the enamel (otherwise known as “expensive” boxes) and while I strongly believe in getting the best tools you can go for, the truth is, I got into this whole thing not because I had visions of producing great art, but because the urban sketching movement appealed to me, the whole idea, I suppose not so much of location painting, because sometimes I just don’t have time and there’s a camera on my phone which I use to take snaps of things I may want to revisit with a sketchbook later, but recording the environment around me because it changes. Dublin has changed a lot in the last 20 years. Not doing the paintings on location, however, means that to some extent, a lot of my stuff can’t go on the urban sketcher feeds yet. However, for those days when I do hunker down and do some painting on location anywhere, I don’t want to be schlepping a whole art studio around. All that gear, excluding paper, fits into a pencil case.

The pictures aside, this is basically my art journal kit minus the paper. Two small paintboxes, a pencil, a fineliner, an eraser and a waterbrush. I have a set of actual brushes too, but one of the things that is handy about the waterbrush is that if I keep it filled, one thing I don’t need is a bottle of water. I had a vision of this all fitting into my handbag, which it did until I added the second paintbox (it doesn’t really matter that it doesn’t now because what also didn’t really fit was any thing like paper). I use Caran d’Ache water brushes, or that size in particular, because I like using them, they seem to survive longer than my Derwent ones and they behave better as well. I have one Pentel one as well. Like a lot of things in Ireland, the supply of some art materials can be difficult and the easiest water brushes to get now are Derwent ones; Easons had some yesterday and the Art and Hobby stores stock them as well. It was in an AnH store I got the Pentel one; it’s the only one I’ve ever seen here and therefore I’m somewhat sparing in my use of it. Kennedys have recently started stocking the Caran d’Ache ones so if you are in Dublin at least, that’s an option.

One of the things I have blogged about in some detail is the regrets I have about not keeping a travel art journal when I was travelling over the last 20 years. So when I sat down this evening, to the sound track of a fog horn (seriously), I sat down to paint places I have been. I’ve been to all three locations above. Two lighthouses, one in Ireland, and one in almost a direct line due south, in Spain. For people who know me, the lighthouses are probably not surprising. The other one is Sydney Opera House, and that’s round 4 of its sails in my life. They are getting better all the time. I do have the journal set aside to start revisiting places I have been and now I am starting to draw these places.