We had a referendum here in Ireland on Sat 10 November. The results were out today and the referendum was carried.

I don’t want to go into the rights and wrongs of this particular referendum, but one of the things that has been concerning me lately is that we seem to have spiked in the number of referenda lately. When I was a child, referenda were a big deal. They were quite talked about. It just feels like we have referenda at least once a year lately. So I wanted to have a look at the underlying data and see if there was an increase in referenda lately and additionally, because a key feature of yesterday’s referendum was a particularly low turnout, I wanted to have a look at voter turnout in Irish Referenda.

This is building up towards a bigger post on the subject later on one of my other websites but this is just a WIP which I’d be interested to see some comments on.

First up, the data relating to referenda, dates of same and turn out came from Wikipedia:

The first thing I did was graph the number of referenda per decade. The output graph is here. 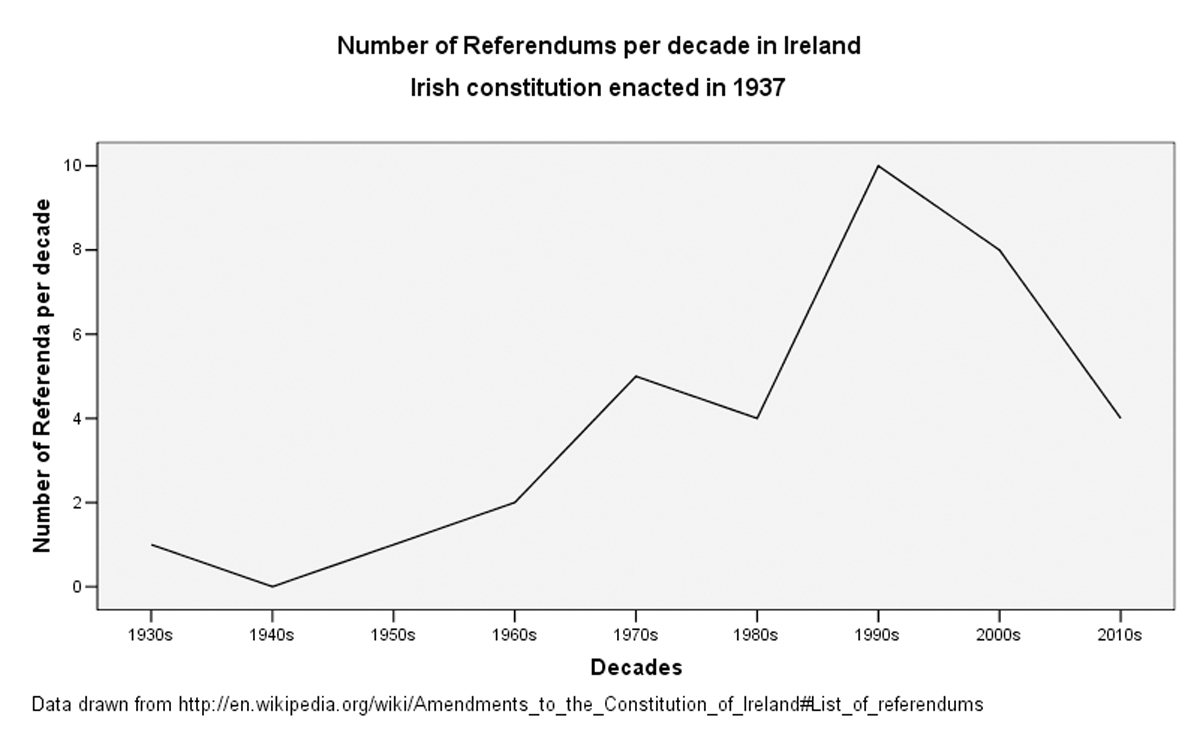 Okay, a couple of notes about this. There was only one referendum in the 1930s, and that was the referendum for the enactment of the current constitution in Ireland. There were none in the 1940s and from then on there’s a fairly clear suggestion that we’ve been having more and more constitutional referenda. We’re only in 2012 for the current decades so it’s not a full interval but we have already had 4 referenda since 2010 – 2 in 2011 and 2 in 2012. There were drops between the 70s and 80s and the 1990s and 2000s but it’s hard to escape the conclusion that we’re having more and more attempts to amend the constitution.

Now to turn out.

Okay, there’s a bit of work to be done here. One of the things that surprised me is that the turnout on 10 November 2012 isn’t actually the lowest turn out ever. Two referenda held in July 1979 came in lower and after that, one held in November 1996 was lower. The plateaus you see above by the way are where several referenda were held on the same occasion.

The data here are, in my view, a bit all over the place – there’s an argument to suggest turnout is on its way down – the highest turnout was the enactment of the constitution itself in 1937. The second highest was in 1972 for accession to the European Economic Community as it as then. For every other referendum since then, turnout has been below 70%.

So I wanted to see for how many referenda there was a turnout in excess of 50% of the electorate. There have been 35 referenda including the referendum to implement the 1937 constitution and of those, in 12 cases, the turnout was below 50%. This figure includes this year’s children’s referendum, however, the six previous to that were above 50%.

I want to have a look at the data in a little more detail, I want to look at the subjects of those referenda for example, and I believe I need to check some of those dates against the dates of other elections such as general elections – my memory is unclear on this but I’m pretty sure that at least one referendum has been held in tandem with another election. So more research is needed. I also want to see what the impact of running several referenda together is.

Part of this is based on a wider concern I have about how fit our constitution is for our country in today’s age. Our constitution does not require a minimum turn out for a referendum which I think is regrettable. I think it’s important to have this debate now because Fine Gael has flagged an intention to remove the second house of the Oireachtas (this would also be subject to a referendum) and I wonder if it might be a suitable time to consider implementing a change to the constitution regarding a minimum turnout for referenda. I am inclined to wonder how governments would react if constitutional amendments failed because there was not an adequate turn out to get the change implemented. I cannot help feeling that they would not like it.

I also have to question whether a constitution which needs to be updated as frequently as we have ours in the last 20 years is actually really suitable now. There are a lot of good things in our constitution but….we’re chopping and changing it quite a bit lately.

Subsequent to the Constitution being accepted in 1937 there were two amendments passed by the Oireachtas per a special provision in the Constitution. Between then and 1972, no changes were made to it. Three referenda were put to the people, one in 1958 and 2 in 1968 but they were rejected on turnouts of 58.4% and 65.8% respectively. Of the 35 referenda in total, 9 have been rejected, four since 2001.

The key issue I have, however, is that the creation of a new constitution requires someone with a bit of vision and someone who will not draft a constitution by committee. One of the key comments around the Children’s Referendum in 2012 was that wording it was extremely difficult. I honestly believe that the constitution of a country should be something a bit visionary and very accessible to the people in that country without law degrees. Again, the Children’s Referendum caused some difficulties in this area – some commentators are claiming the low turnout was linked to confusion. I’m not an expert in law but I believe that a constitution which requires approval from the people should be drafted in such a way as it doesn’t necessarily cause confusion for the people voting on it. This has been a massive issue with respect to European treaties as well.

I’m still looking at the numbers so this is a work in progress.