This is about the best motivational poster I know. There’s a variant for running as well. 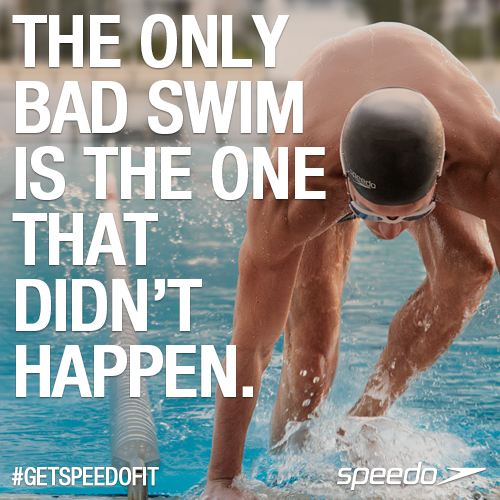 It stands out quite a bit to me as there are any number of other motivational posters which operate on the basis of making you feel bad about how poorly you’re doing. I think that misses the point in a lot of ways.

I had a truly terrible swim yesterday. Mostly it’s because I learned the hard way that sometimes, at 10.30 on a Sunday morning the swimming pool is a bit packed. Both pools were packed, both the 25 and 50m pools. There were people messing around in the diving pool as well.

Mostly young boys it has to be said. It leaves me conflicted. As a general principle, I think it’s important that children and their parents spend quality time together doing stuff, like swimming (for example). But I spent most of the last 10 years of my life in Ireland as a member of private gyms which had as a plus point pools which were generally usable – very few children  and generally not so busy that they could not be used.

I sort of envied the kids playing on the diving boards. As part of my project to reduce the number of things I regret not trying, I signed up for springboard diving lessons in the National Aquatic Centre in Dublin. They didn’t go well for me.

But as far as actual swimming is concerned, I got very little other than regular collisions because other people just don’t seem to care if they swim into other people, don’t care if they block lane ends, don’t care in general. I think in total I managed to swim around 150m. This is basically pathetic.

But at least I went; it’d be worse if I didn’t.