I spend my life on youtube looking at artsupply and stationery hauls and never seem to get around to doing them. So I’m starting with a swimming supply – sort of – haul. There’s a sale in one of the big sports shop and I was in the market for quite a lot of stuff, not all of which I wanted. I wanted a spare pair of trail running shoes – they are end of line and therefore impossible to get – well in my size anyway. The size below fitted onto my feet but made it clear they would cripple me if I tried to run in them. Bloody sorry I didn’t buy several pairs when I had the chance, in the last sale. Nor could I see my way around to where they had things like yoga mats.

This left the swimming section of my shopping list which consisted of:

So, what I eventually wound up with was this: 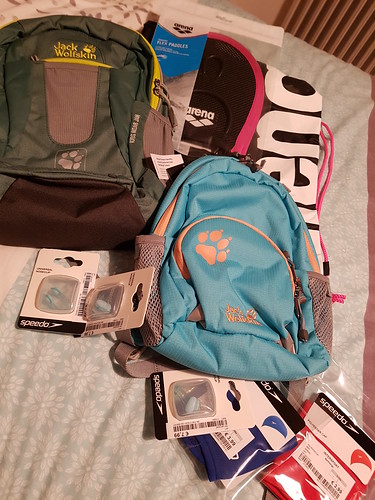 There was no Garmin swim and I didn’t feel like blowing money on the Vivoactive – the reasons for this will be blogged in about 30 minutes from now max.

Currently, the two pools closest to me in Luxembourg are closed for extended periods for refurbishment; one until the start of September and one until the start of October. The pool situation is a bit tight here at the moment as a result, although I have two alternatives, one of which I have already checked out. The thing is, I have a deep desire to get back swimming regularly, not because I was particularly fast (I backstroked but…) but because I felt a lot better for it. Not that I feel bad now but once you drag yourself out of a house, and to a pool and drop into the water, the world always seems to shine a bit more.