I used to go to the city of Lyon quite a bit some years ago. I don’t like to count but certainly ten years ago I was going there often. Once, I found a needlework store in the 2nd Arrondissement and I wandered in, and came out later with less money, clutching 2 tapestry canvases which I carefully tended back to Dublin and kept stored in a poster roll for about 10 years, It wasn’t intentional but a career as a kitesurfing photographer distracted me for a while as did a nightmare of a project involving embroidery silk that took about 5 years of my life. I then did a couple of lighthouses, and finally, reached a point where I had no works in progress and had to choose between 2 or 3 different options for Next Big Project.

So I chose this one. 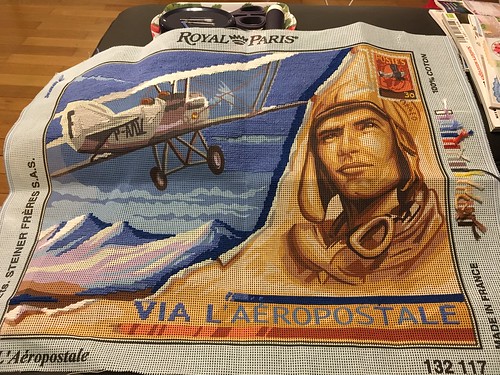 For me at the time, it was an unusual project to have bought seeing as it:

Pretty much every other major canvas I had bought by choice featured a lighthouse, the sea, or Brittany, or occasionally all three. I picked up this one because at the time, I had a liking for Antoine de St Exupery, and he had been a pilot for the Aeropostale service, and had written a book called Vol de Nuit. As a nice piece of symmetry, the airport in Lyon is called St Exupery. He’s obviously best known for writing and illustrating The Little Prince. He disappeared over the Med during WWII.

I’m not certain when I started this but it’s probably 2 or 3 years ago. It got brought with me when I moved house but it occasionally finds itself deprioritised in favour of twitter. So it’s not going as fast as I had hoped. But I have days like today when I get a notable bit done and there’s some progress since I last photographed it in July.

I’ve also joined the needlepoint group on Facebook which has provided added motivation on one front. It has also been educational on a few other fronts. I’ve generally done needlepoint alone for the last 12 years.

I started doing tapestry in 2005. I did a postgrad between 2003 and 2005 and when I finally got out of that, I wanted to do something different, something more tangible. So I went to craft shops and I signed up for crochet lessons in the evening school at the comprehensive in Ballymun. The classes were given by a great lady whose name I don’t remember but I do remember hoping that when I was her age – ca 90 – I’d have the same get up and go. Anyway, the crochet and the tapestry stuck but I didn’t know anyone else at all in the world who did tapestry. It was like my secret hobby. There are upsides to that (no one tells you what to do) and downsides (supplies are thin on the ground as is gadget news and access to blogs). For years, the only websites I could find selling tapestry canvases were in Australia until I found a site in France.

Anyway, via the FB group, I’ve come across the fact that other people do lots of different stitches. I do have half cross and that’s all I ever have done. They have deep and meaningful discussions about thread selection – I chose the DMC 4 ply as recommended by Royal Paris or whoever printed the canvas. The American stitchers are big into handpainted canvases. I haven’t seen these much in Europe at all but the ones in America are eye wateringly (and understandably) expensive. I couldn’t afford that hobby in the US, I think.

But they’ve also brought me into contact with the modern world and tools. Tools which are actually manufactured here in Europe.

Specifically, they introduced me to magnets. 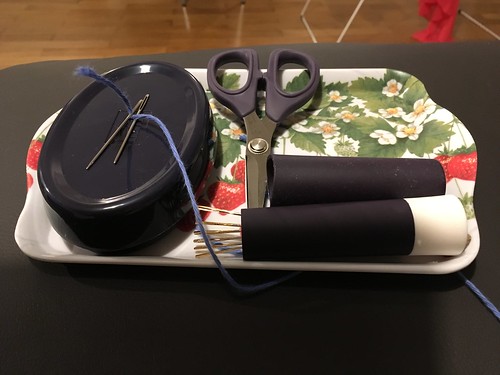 This photograph includes a brand new Prym scissors. I’ve already written extensively on scissors here, so we will skip over the scissors. The other two items are magnetic.

I have lived my life surrounded by fridge magnets and yet it never occurred to me to use them to corral needles while I was doing needlework. The oval thing there is magnetic. I think I bought that in a craft shop in Brussels the week before last – it’s probably way bigger than you’d think but it’s somewhere to keep the active and spare needles while you’re stitching as opposed to having them stuck somewhere awkward in the canvas.

The other thing is called a needle twister. It’s the simplest idea going. There’s a magnet in the bottom which attracts the needles, and the white bit twists so that the inside of the thing is pushed up exactly like you would be twisting out a lipstick. It is the handiest way to keep needles under control and so far, I haven’t lost any. As I typically lose full backs of needles at a go, this is quite great. I bought that in a craft shop here in Luxembourg. As a gadget, it scores top marks. Now I’m just looking to get a few in other colours, probably on websites that have canvases that I never knew I wanted but now I have to have…but that’s the nature of every hobby I’ve ever had. Gadgets proliferate.