I’m a fan of the artwork of Pascal Campion on instagram, not necessarily because I like the basic techniques he uses, but because every single one of his pictures tells a story, and you can get a very strong feel for the story. I love it and while I haven’t done anything about it, I would, at some point, look at acquiring a print or two. I say the same about Iraville too. I will get this one when her shop is open again and if she makes it available.

Both are very different to the stuff I tend to do.

Today’s piece of work was a watercolour. I spent a lot of time thinking about this. In a way, I struggle with painting lately because I seem to need work space and I don’t always have it.

When I started painting I used to do it anywhere. Including bed. Watercolours in bed. Madness. I don’t do it any more, although that’s mostly because I don’t keep the art stuff by my bed any more. And I don’t use waterpens as often any more which means it’s a far riskier activity. 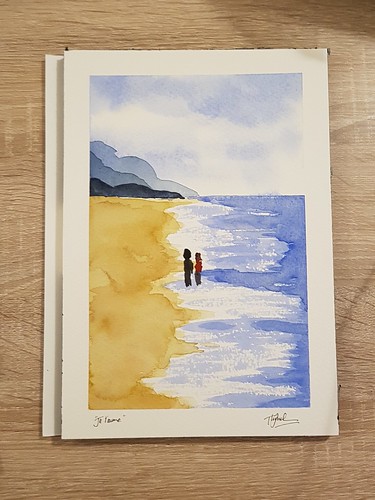 First the technical stuff – because I look for it so I assume other people probably will – I used Saunders Waterford rough white paper because it was the top of the pile of watercolour paper – and then for this version of it, I used Winsor & Newton Artists colours. The brushes are mainly an Escoda Number 8 and a Raphael Number 4. Not sure where I picked that up actually but it’s a nice size.

I did two versions of this and while it’s not so obvious in this version, I had a lot of trouble with the blue of the sea I used French Ultramarine which is a granulating colour and I struggle to control it. The first version, I used my beloved Sennelier paints. Second round I decided to have a go with the WNs. Neither was easier or so than the other and I seriously screwed up the sand above. So this painting will be redone at some point.

But it caused me to think about paints. I have a lot of watercolour media – the standard European paints, Japanese gouache, watercolour pencils, watercolour pastels. I will also buy an Inktense travel set whenever Derwent eventually start to sell them because their pencils are quite intense and travelsets tend to be easy to lug around.

When I started painting, I started with the Cotman sketch set. It’s a small set that has 12 Cotman pans in it. If you read any of the online watercolour forums, like wetcanvas, you’ll probably come across conversations about buying the best you can possibly buy. I’d temper that by saying buy either the Cotman sketchset or the Sennelier 8 pan travel kit. The Sketchbox in itself is incredibly usefully sized which is why I own two of them although the second one mainly has WN artist pans in it because you could not get the Cotman pans individually in Ireland when I started. I don’t know if you can yet. They were small and handy. They explained why I could paint at lunch hour (Sennelier) or in bed (Cotman box). After falling in love with the Sennelier set, I had to make a decision about a bigger paint box and it was down to WN, Sennelier or Schmincke. In all cases, I was going to buy a 48 pan set and I chose Sennelier. It’s a great box but it’s not conducive to painting in bed. Painting has become a bigger production than it used to be. I’m not sure that’s a good thing.

I bought a WN 24 pan Artists kit in London about 2 years ago in a sale – we are talking a serious chop in price at a reputable art shop – and have occasionally considered passing it on to my niece who was using mainly Cotman paints at the time I’m sort of glad now I didn’t The kit is smaller, takes up less space than the Sennelier, and means decisions about colours are quicker. I think it’s part of growing as a painter that initially you want ALL TEH COLOURS and then you start thinking meh. So I am considering buying a Sennelier 24 pan set. I don’t live in Sennelier country but Schmincke country so yeah, that’s going to be an online thing again. There is also really the problem that I don’t necessarily want Sennelier to decide what colours I get, but for me to get an empty tin and a list of the colours I want. You could argue that really do I need a 24 pan set when I have a 48 pan set and why don’t I just get the empty box and blah blah blah. I don’t know yet. I mean, yes, there is the 24 WN set but I also have a 24 pan set of Schmincke Akademie watercolours – that’s their student range but I bought it because frankly, the tin was gorgeous. Rather superficial but there you have it.

So, basically, not sure yet. I’m still not ready to move over to the whole tube thing mostly because pans are easy to organise and tubes interfere with my need for order.

I’ve realised I sort of hoard stuff and this is obvious in that, you know, some people they spend their art life doing everything with a 2B pencil and an eraser. I have ooh, with me here in Luxembourg ca 7 paintboxes plus watercolour pencils plus watercolour crayons, I have several million different pencils, I have both uni Posca and Faber Castell markers I have pastel pencils. I have art tools. Arguably, you could say I wouldn’t notice another paintbox or more to the point, mainly I don’t need another one. I will go to the art store on the quays in Paris the next time and think deeply about it.

The second piece I did this weekend was a marker piece, or more mixed media. I used dry coloured pencils as well 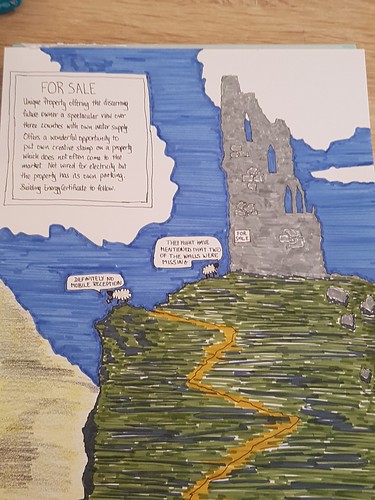 I wanted, at some stage, and still do sort of, to do the occasional comic. I already, somewhere, have a piece involving sheep acting as ramp agents in Galway Airport but I think it needs to be redone and lined properly. I also suspect they should probably done using the uni Poscas rather than the Faber Castells. But anyway, these are two sheep in the market for a country pad. It grew out of a conversation I had with some friends and the main reason I don’t develop them as characters is that there are some wellknown sheep characters around. Shaun the Sheep for example, and there’s a whole gamut of Irish tourism merchandise that is sheep focused. So if I were to do anything with it, I’d need to be thinking very carefully about it. I’ve looked at building a Surfing Annie character but the big issue with that is lacking the drawing skills.

When I was a photographer, I came to the conclusion that effectively, a massive change in the photography world coincided with my getting interested in it. Maybe it caused the interest, maybe not. I’ve never worked out. But just at the point where I wanted to do certain things, digital SLRs made it possible for me to do it without bankrupting myself.

I sometimes thing that there is an element of that with the drawing stuff. I struggled big time in the early days discovering I wanted stuff that I could not easily get. There are still things I find it difficult to get – I own 3 0.03mm Copic fineliners and blood will spill if anyone other than me touches them. Such fine tips are extremely difficult to find here. I used either Faber Castell or Uni Pin fineliners otherwise. I have bulk bought Uni Signo white gel pens in bulk because they could not be got in Ireland. One of the most useful pens in the world – a white gel pen – could not be bought at all. But over the time from where I started to when I left Ireland, I noticed it getting easier to get stuff. Some of the other stuff I only need to buy once – but the consumables, choice of paper. It could be very painful. But I love the Faber Castell Pitt pens now. It took me a while to get used to their brush tips and now they have softbrush tips in the greys and black range and I love them (and want them in the rest of the range. But the stuff I do, I probably couldn’t really do without them and 10 years ago, they weren’t really there and markers weren’t something that people lauded per se.