This is a veritable jewel of a piano shop. It has a large selection of grand and upright pianos. I must confess I skipped the digital section because I play a digital piano at home and this is to remind me that a digital piano, while it allows me to play, is still not the same as a real piano.

Hübner Pianos are a Steinway dealer. I have to confess that while I recognise the workmanship that goes in to them, I have never felt a grá for them in the way I have felt a love of 19th century Bechstein grand pianos for example. And the reason I went to Hübner anyway is because they also sell a piano I had never actually seen before – they have their own in-house piano models. 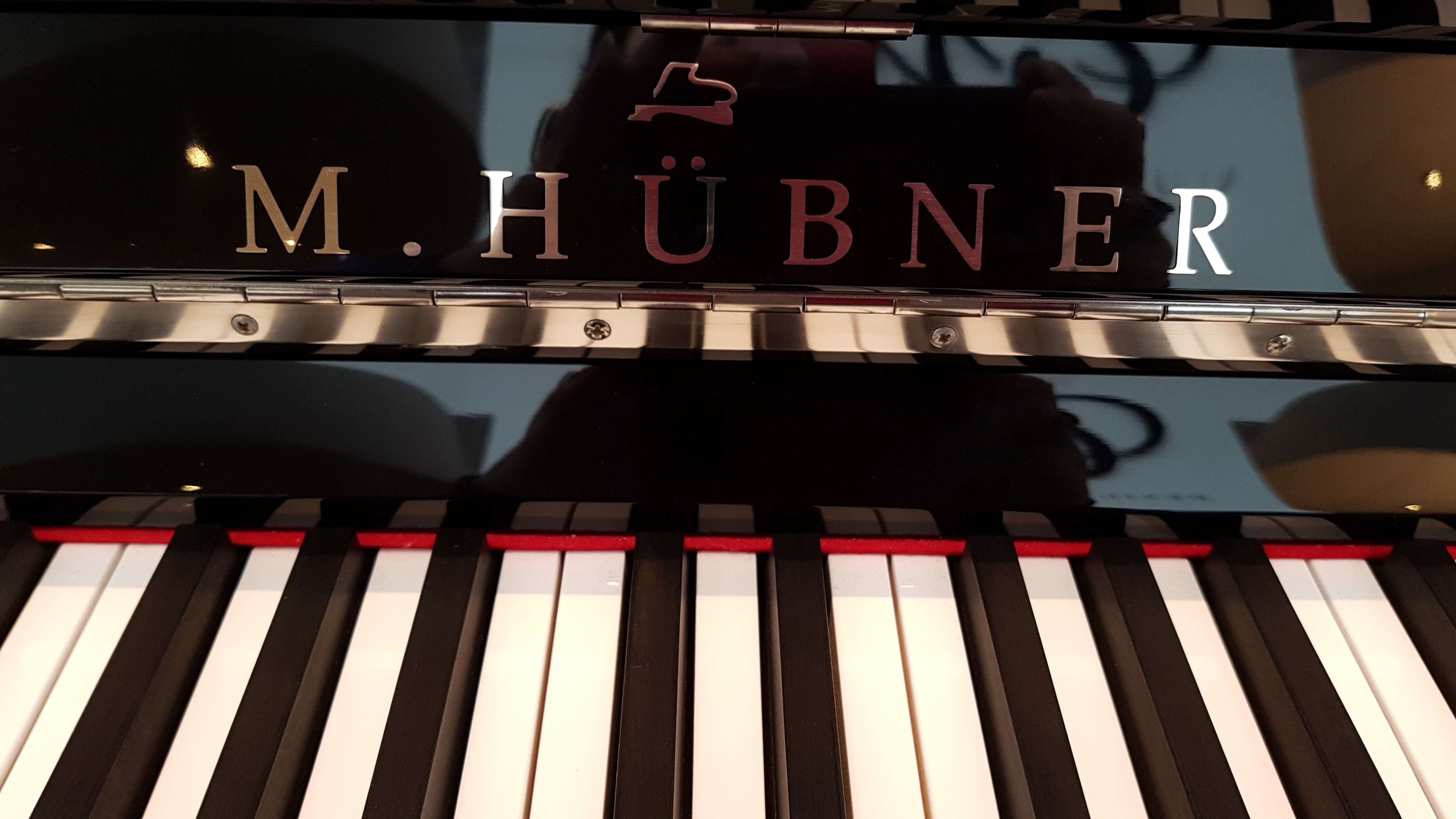 Most people who know me are aware that for most of the last 20 years I have been saying I want a grand piano. So it might come as a surprise to know that the piano I truly gave my heart to today was an upright piano. It is a Jubilaumsklavier  and it has a beautiful rich sound, the like of which I have never gotten out of another upright piano. I’ve played a few of the newer Bechstein designed uprights like the Hoffmans and I’ve played a couple of Yamahas and one or two Kawais. They really never made me feel the way a beautiful grand made me feel. This didn’t just come close; it bypassed the feeling that I get from some of the smaller grands like the smaller new Kawai grands.

Hübner make grand pianos as well a few of which I played. In particular I played – and loved – a B212 Artist. For the longest tie I assumed that my grand piano, if and when it eventually came, would be a Kawai but to be honest, I don’t think this will be true any more. I preferred the B212 to the B187 – the B187 is a smaller piano and in truth, I tend to prefer the pianos that are at least 1.5m – there is something more aesthetically pleasing about them – the proportions are more balanced, even when the difference in the length of the piano is only around 3cm.

What I loved about the Hübner pianos – both the uprights and grands – is the responsiveness of the keys. The keys seemed just perfectly weighted – and this really brings into stark contrast why a real piano is still a far greater instrument than a digital – and the tone of the piano was far easier to control. The pianos resonate perfectly – and I should mention I was in the shop on a Saturday morning when they had a few people testing pianos – and the sound balances perfectly around you as a player. In practical terms, I cannot actually get one of these pianos just yet but when the time comes I may lock myself away with a Hübner piano and emerge only for breakfast.

In addition to those pianos,  I also played one of the smaller Steinways – I didn’t note the model but if I remember rightly it was a secondhand piano  – and I liked it a lot more than I like Steinways. It is possible that part of it is that someone else has broken the piano in but based on other things I noticed about the shop, I suspect it may be because Hübner have outstanding piano technicians looking after their pianos. This piano was far more responsive to what I wanted to do, and its dynamic range was broader than I have met on most pianos.

The other piano which I met and loved, again somewhat unexpectedly, was a Yamaha C3. I think the year of manufacture was noted as 1976 but I may be mixing it up with another one. This makes it one of the older Yamahas I have played.

I have a love-hate relationship with Yamahas in general, but especially with their grands. In my experience, their pianos are very hard to play; their key action requires quite a lot of force to get a sound out of the piano and for someone who has a soft touch, it just seems like too much hard work. At some point a few years ago I had a conversation about this with a piano dealership in Ireland and the salesman recommended I try just one particular Yamaha which was second hand and which their technician had done some work on. I’ve concluded since then that Yamaha probably build beautiful pianos, but I will never buy one new and I would definitely want a good technician to have at it. I have played I don’t know how many Yamahas over my life but I’ve really only liked two of them. Both of them were C3s and both of them were second hands and not exactly recently built. This probably doesn’t prove anything. Anyway, the C3 compared well with my expected grand piano budget but will have to compete with either a Hübner upright or, if I save up extra specially hard, with a Hübner grand and neither is going to happen yet.

It would be very easy for me to stop here and say, yes, Hübner is a lovely piano shop, and they have a selection of absolutely beautiful pianos that fill your heart with joy to play. But I won’t. One of the things which marked out Hübner as much, if not more, than their pianos, were their staff. I met three of them, including Mr Hübner himself, I believe. They were unfailingly friendly and helpful and more than willing to help in any way or answer any questions I might have. I found it to be a welcoming piano shop.

I come from a very different piano tradition to most people in Germany. I grew up playing the music of Ireland with some classical thrown in. I never play classical in public and what I used to test the pianos were variations on music from the folk traditions of Ireland, Scotland and Brittany. I was made to feel utterly at home in front of their pianos.