Let’s assume you want to get more women into science, and more women to stay there once they are in.

And then you release this video clip. Daily Telegraph link by the way.

I feel sorry for the European Commission in certain respects. They have to deal with all sorts of cross cultural misunderstandigs and miscommunications. They’re everybody’s favourite target – particularly amongst politicians – for a punchbag. And then sometimes, they just get things wrong.

There are issues getting girls into science. I’m not absolutely sure why although when the time was I chose languages over chemistry because I wanted to live in France (yes, I know this is a superficial reason) and the chem/lang course I’d love to have done did not exist at the time. I am back studying mathematics and statistics however with some vague interest in geology and oceanography so….

But women don’t stay in science because they don’t think it’s cool and trendy. There are practical issues for a lot of jobs which make them very unfriendly for women who take time off to have children. There is a lot of instability in the academic/science world in terms of funding at the moment. Science is still not really all that well remunerated compared to – for example – the financial industry. And, though it grieves me to say it, whether many are willing to admit it or not, women are not always welcomed by men in the workplace, regardless of what work it is.

This video sucked. It has been pulled from the campaign site now. But in terms of getting girls into science, I have to say I think this comic strip is one of the best ever:

There are a couple of great, great messages in this.

I first discovered Alan Turing by reading The Code Book by Simon Singh. This year is Turing Year; it’s the centenary of his birth and today is the day.

There’s a round up of useful informatino here around activities linked to Turing year courtesy of Christian Perfect here. It’s well worth a look.

I have a job in information technology. Alan Turing was one of the key groundbreakers making the future I live in possible. 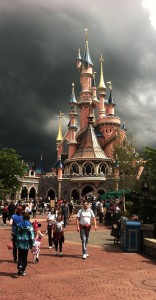 I was in Disneyland in Paris during the week. It was a one day trip, but while we were there, I witnessed the most amazing rain and thunderstorm that I’ve seen in a long time.

We came out of one of the restaurants to the news that nearly all the attractions in the park had shut down; my niece, operator of the iPhone app keeping us updated of queue lengths and fastpast wait times wasn’t sure why this might have happened. A glance at the sky, however, was a bit more revealing.

Most entertaining was the guy who cut his losses and breakdanced his way through the rainstorm as he was already soaked. I’ve never seen clouds quite like this in Dublin – some fairly nasty ones yes, but nothing as dramatic as these ones.

I’ve been a way for a few days during the week so am just catching up now with this. Transpires the US Olympic Committee took a bit of exception to the existence of something called the Ravelympics.

If you read my other site, thingsthatstrikeme, you might know that I occasionally wield a crochet hook or a pair of knitting needles and linked to that, of course I am a member of Ravelry. I’ve never gotten involved in the Ravelympics though because of course, I haven’t really had time (look, the last major work I finished took three years; we have a top that’s running on a year at the moment so…). But I’ve known about it. Basically the deal is you sign up to do something a bit harder than you’re used to, and start it with the opening ceremony of the Olympic Games and finish it with the closing ceremony. That’s the deal. What people do tends to be up to them, they may decide to clear a bunch of works in progress, they may decide to do their very first sweater, lace shawl, you name it. The options are fairly limitless. And typically, they do all this while watching the Olympics and supporting the athletes from their country. Ravelry has a 2 million strong user base, and the site itself, while based in the US, has a worldwide reach. It is an extraordinary example of the use of social media to promote a particular interest and beats off competition from any other specialist site I know including all the photography ones in terms of its reach and success in its target community. It is funded by advertising and the advertising is fully targeted towards its user base which is a bad thing for me, actually because look at all that lovely yarn they have in the Yarn Room. I digress.

Anyway, the USOC sent a cease and desist to Ravelry over the Ravelympics because they own Olympics in the US and it’s fair to say, the C&D wasn’t all that well received. Not so much about the accusations of trademark infringement but the attitude towards the knitting and crochet community. Money quote is this one:

“We believe using the name ‘Ravelympics’ for a competition that involves an afghan marathon, scarf hockey and sweater triathlon, among others, tends to denigrate the true nature of the Olympic Games,” the USOC wrote in the letter. “It is disrespectful to our country’s finest athletes and fails to recognize or appreciate their hard work.”

All told, I’m not sure I agree with the USOC on this, frankly. I’m also not sure that their understanding of the true nature of the Olympic Games matches mine.

Ravelry seem to be looking into a rename of the Olympic driven knit-along. I don’t blame them. They’re a small site and they don’t have limitless funds. However, it’s clear to me that the USOC aren’t all that clear on the hard work that goes into creating handmade items on a large scale. LIke I said, I’ve this intricate lace skirt that took three years. Three years for one item.

From the same article:

The USOC, for its part, has released two written apologies on its website, but it has not backtracked on its requests. “That [cease-and-desist] letter was sent from our law department and was written by a summer law clerk,” explains Sandusky. “The ‘denigration’ statement was made in error. The letter was probably a bit strongly worded and we regret that and apologize to the community. But we don’t apologize for trying to protect our right to the term ‘Olympics.’”

I just have an issue with the idea that C&Ds are sent out by summer law clerks. Additionally, I do question knowing the price of everything and the value of nothing when it comes to the right to the term “Olympics”.

I suspect their issue relates to slippery slopes. I feel sorry for them.

I started studying for a degree in mathematics and statistcs with the Open University last October and so far, it seems to be going well. It is involving a certain amount of planning however, particularly in terms of modules.

I’ve been to university three times before and have the paperwork to prove it. Each time, I pretty much did what I was told by the university concerned in terms of working towards said paperwork. In DCU, I think I got to choose options from a couple of pairings of subjects but there wasn’t much in the way of electives and that was for the language degree. I don’t think there was an elective for the postgraduate diploma in IT and apart from freedom to choose from some of the evening school (I did Finnish), I don’t think there as anything much in the way of elective at the University of Westminster for the interpreting diploma either.

I have 60 credits to play with on this course, however, and I am finding it difficult now to make a decision. Initially, because there are such a lot of maths courses there, I was going to choose from them but one of my friends has noted I’m going to be doing a lot of mathematics and statistics and a break probably would be a good idea. I looked at a database design course which I figured might be useful but actually, what I’m slightly more interested in at this point are some of the science courses. The shortlist was initially oceanography, geology and astronomy (pick two) but being honest, I don’t think I’m up for the astronomy. So there’s a very strong possibility I will take 30 credits in oceanography and 30 in geology. This decision needs to be made soon because the oceanography course is only available this February. I don’t see any evidence that there will be some sort of replacement. I need to look into it very carefully, however, because it’s a level 3 science course and at this stage, aside from some statistics and maths, I won’t have any level two science which makes a level three science quite a tall order.

The Open University helpfully provides a reading list and having looked at an introduction to one of them on Kindle last night, I’m going to get it and read through it and if it looks like I can manage it, or can get enough help on the basics that I may be missing, I might be okay.

I have past history with science; I did chemistry for the leaving certificate, yes, and had to study technical English and physics in my language degree (I got a very good grounding in economics at the time too, enough to avoid buying property in Ireland between 1999 and 2012 (so far)). I studied supermolecules for my degree project in French and German. They were amazing.

So I’m inclined to hope I can make this work. Then, the question is, will anyone want a statistician who knows a bit about rocks and oceans?

Small things make me happy….thank you so much.

This is really just a brief note for anyone who still has an RSS feed for windsandbreezes.org stashed in a feedreader, if, indeed, there is anyone who does.

I’m in the process of rebuilding the site. It will slowly be coming back to life over the next few months.